Have you ever had one of those days when you tried to put your eyeliner on in the car but your arm kept moving so you had to keep evening out the differences between the eyes until you ended up with a face full of eyeliner instead of just the usual small, thin cat eye on the top lid that you were going for?

Yep. Happened to me this weekend.

I was using Urban Decay's 24/7 liner(zero), which is the best eyeliner ever, so there was really no way to fix it without using a makeup remover and taking it all off then reapplying, which was of course, impossible in the car, since I had been unprepared for mistakes.

I probably would not have minded so much if I could have made clean, smooth, straight lines on my lower lids, but my clumsy and out of practice hands(I only wear liner maybe once a week) were only capable of gritty looking lines, which just didn't look very good close up. I felt like I looked like a teenager who wears her awkward heavy eyeliner because she simply doesn't have enough experience applying it to really find the fine line between rocker chic and meth head. 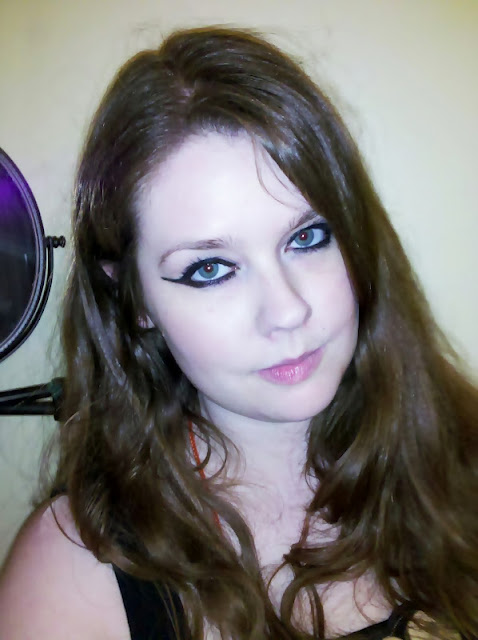 I didn't really have any choice but to go with it, so I did. I wore my sunglasses quite a bit to cover them up..heh heh.

I have to say, this photo was taken after I was back at home that night, and it looks like they evened out a little bit through out the day, because they looked MUCH worse when freshly drawn.

Ah well. I wore them, I went about my day and the world didn't end. So there's that. First world problems, right?

But next time, I am definitely applying my liner BEFORE I leave the house. Lesson definitely learned.
Posted by Brandy Cupcakes at 4:54 PM