I don't know WHY I do it, I just know that I DO do it. Every year. Minus last year, because I was puking my guts out.

But, I am bad at crochet, so unlike my mother, who could build you an entire wardrobe of sweaters, swants and hats in that time frame, I make scarves. And, only scarves. In fact, I probably have several afghans worth of scarves, if I had the time and ambition to sew them all together.

At any rate, this year I decided I wanted to challenge myself a bit and make a cowl. Yes, one of those ridiculous hipster cowls that are all the rage on etsy.

"A cowl? Why is that a challenge? A cowl is easy..." you might be saying to yourself right about now.

But for me, anything past simple back and forth rows is a challenge. When you make a cowl, you are crocheting in a circle. And to make a circle, you have to join the two ends together every time you finish a row, then start a new row on top of the previous, and darn it if that isn't just totally confusing for a free-spirited painter like me!

Now that I'm thinking about it, I guess I could just crochet a short scarf and then sew the ends together for the same effect...NOW I tell myself. *facepalm*

I wanted a cowl. I wanted it wide enough that it would cover my double chins. I wanted it tight enough that I could conceal the body of stuffed owl with it, so that the head replaced my head and I could chase my children around the house as "Crazy Owl Head Monster".

Apparently, not only am I bad at crochet, but bad at math. And I might possibly think that I weigh about 400 pounds more than I do, because this is what I ended up with.. 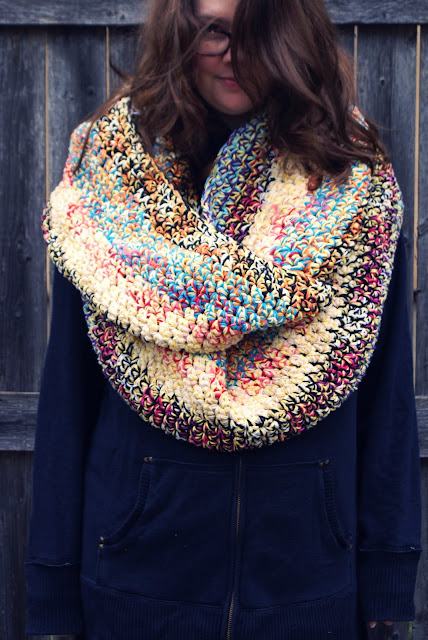 I don't believe I am even legally allowed to call this a cowl. It is actually more of a gigantic infinity scarf. I think. I'm not hip to the latest scarf lingo. I'm just an old lady trapped in a middle aged lady's body, who clearly doesn't know what she is doing. 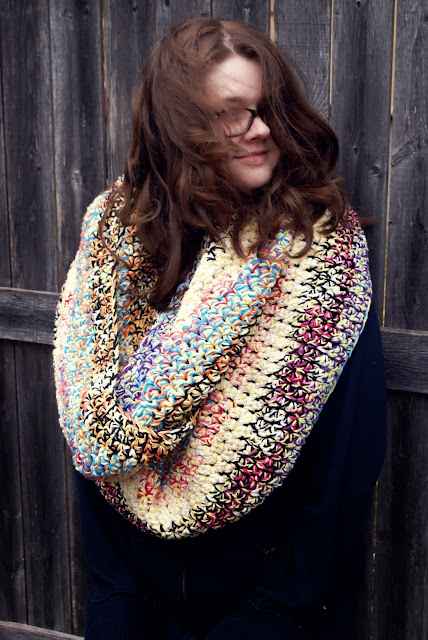 Or maybe subconsciously I do? Because, let me tell you, this thing is warm! I mean, how could it not be? There's like a medium sized throw's worth of yarn there... 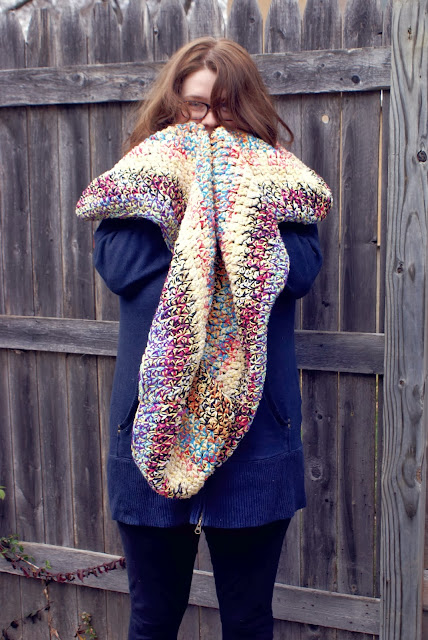 I crocheted it with the big blue plastic hook(see, I don't even know the size or technical term. But if  you crochet, you know what I'm talking about), using three stands of yarn, carrying a yellow all the way through and using variegated oranges, pinks, purples, blues, sands and some black and purple solids as I felt like it. 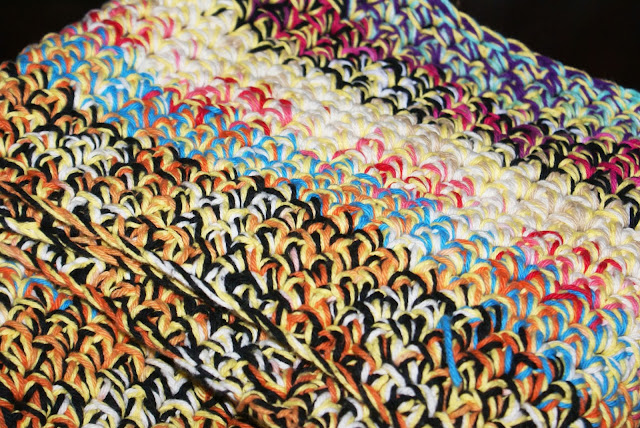 I really do love the way the colors turned out.

I like Lily Peaches and Cream for most of my crochet projects, because it is a cotton thread, but very affordable. Someday I'll get into hand spun and dyed yarns, but I want my skills to be worthy of my yarn first. Heh.

Of course after I finished up my scarf, The Kid wanted one too. So I let her pick out her colors and whipped one up. I did a better job of guestimating, this time around. 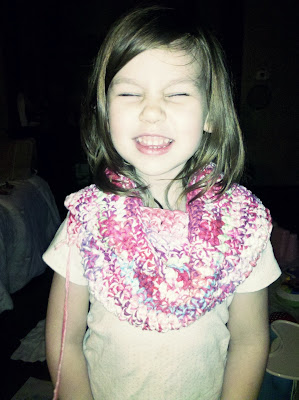 She was pretty pleased with it. 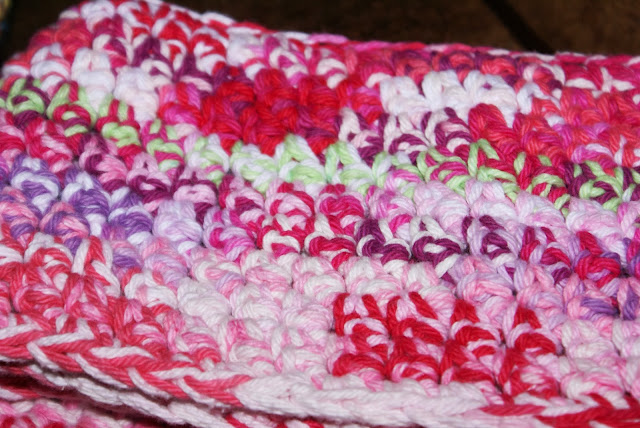 And hey, it fits me too! 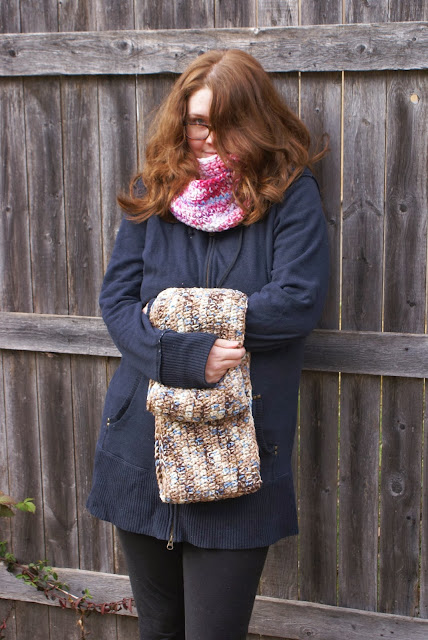 And then Nana(The Husband's mom) saw mine and wanted one too. So I made her one out of good ole Red Heart, because P&C did not have the right colors(to match her coat) available. 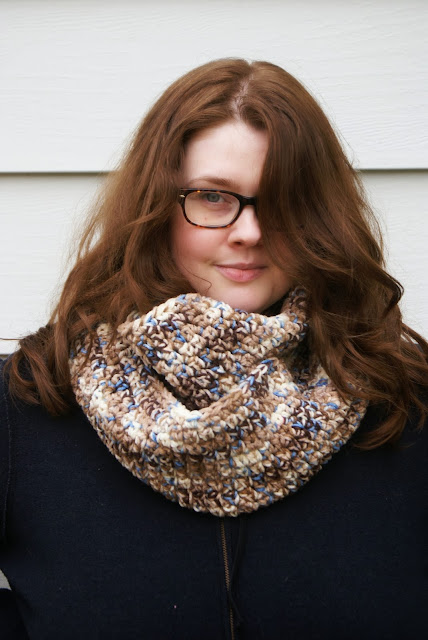 Hers is made from two shades of Red Heart Camouflage. I don't recall the names, but one is cream/tan/blue variegated and the other is dark chocolate/tan/cream variegated. 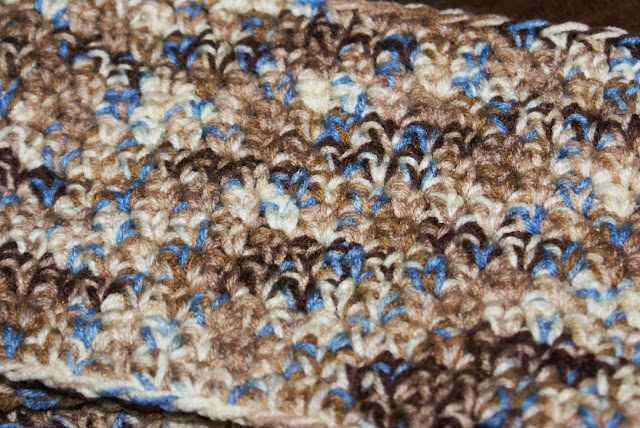 I haven't given it to her yet, but hopefully she'll enjoy it.

I know The Husband enjoyed wearing them while he was playing photographer. 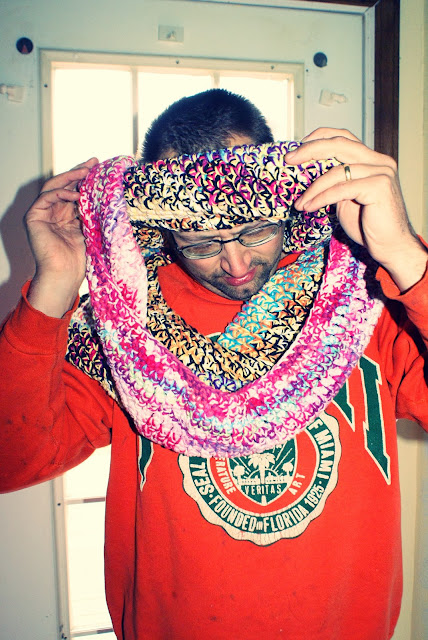 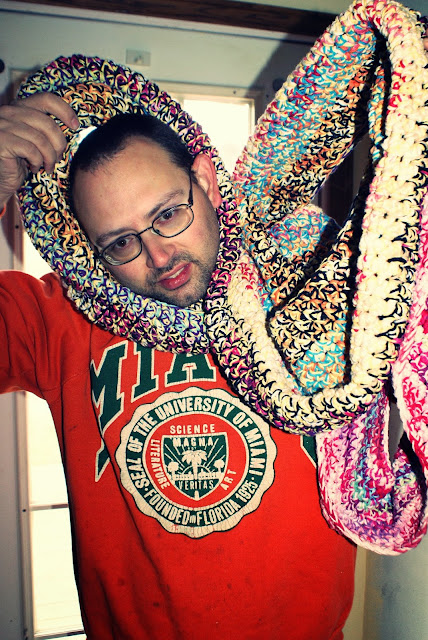 So. I'm moving on to Christmas present production now. I'm not sure if the scarf sabbatical is over for the season, or if I will pick it back up following Christmas. Or New Year.

I sort of feel like I'll just go ahead and move on to another long neglected craft, now that the baby is finally napping better and we are figuring out a kinda sorta somewhat regular routine.

If that's the case, then I'll be content with the pile "o" stitching I did this year. At least they are finished projects. My OCD won't be bugging out on me. 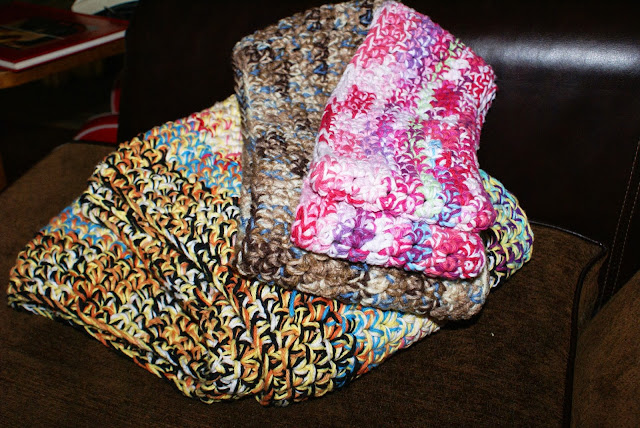 And, affter all, there's always next year. 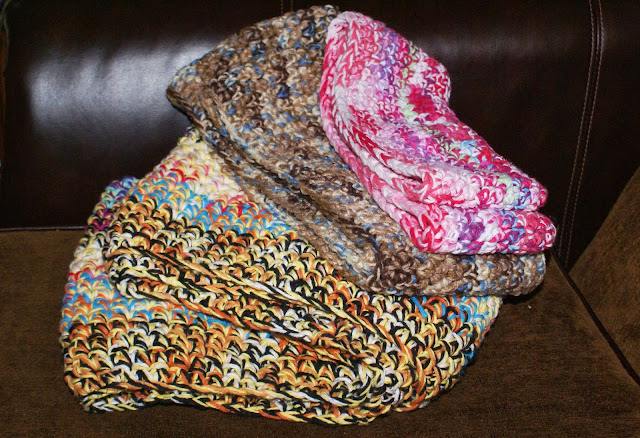 And maybe by then, I'll actually know what the heck I am doing!

Posted by Brandy Cupcakes at 9:34 AM