I don't remember when or how The Cupcake Kid became such a picky eater(she didn't get it from me, that's for sure) but the last couple of years have been quite the struggle to get that child to eat anything other than crackers, noodles, chicken nuggets and cheese. I wasn't too worried about it until she ended up in the pediatrician's office with digestive problems. I knew then that I had to figure something out, because eating nothing but carbs and processed chicken protein was doing a number on her little intestines and such.

I wandered around the grocery store one day, searching for ideas as to how to sneak the good stuff into her diet since she refuses to eat most plant products in their natural forms, and had the good fortune to stumble across those fruit and veggie puree pouches. They are basically just baby food in a pouch that kid's can squeeze straight into their mouths. They work like a charm. My kid won't eat a carrot to save her life, but when pureed and put into a "cool" pouch, she'll eat it three times a day. And they do have neat reuseable pouches now so that you can make your own and save some money. I have a set, but haven't tried them out yet as I'm still a little terrified of the food processor(It is LOUD! And has sharps!). Ha. I'll be sure to let you know how they work out when I do use them. It'll be my luck that she'll know that I made them and they'll be a no go.

Along the same line of thinking-smoothies. You can cover a multitude of picky eater sins(aka plant type foods) with a little bit of ice, almond milk and honey, let me tell you.

My favorite trick, as of late, has been muffins. Fall is here, the days and nights are cooler and we crave something a little bit more comforting than cereal in the mornings. A warm muffin with a little bit of Earth Balance spread on top is a welcome respite from cold, lightweight cereals. And the kid absolutely loves them. I think she thinks of them as dessert for breakfast, due to their resemblance to cupcakes.

This past week we've made banana cranberry flax seed muffins and my new favorite, banana blueberry chocolate chip muffins with crunchy toasted pecans and sugar on top. Yes, there is some sugar and naughty stuff in there, but there is also fruit, flax and nuts in there, things that my child won't typically eat unless they are disguised by something a little naughty.

I have a basic muffins recipe, which I may have shared before, but I will go ahead and share again, just in case anybody is interested in trying these. Soooo simple and can be altered in a million in one ways!

2 cups whole wheat flour or gluten free flour mix
3 tsp. baking powder
3/4 cup sugar or honey or maple syrup
1 egg
3/4 -1 cup or so of milk(depends on the brand of flour I use, some soak up more milk than others)
1/4 cup oil or applesauce
around a cup or so of berries or chopped fruit or smashed banana(you can do more if you wish)
dash or two of salt

Mix. Bake at 425 degrees for 15 minutes or until toothpick inserted comes back out clean.


For the blueberry crunch muffins, I did a cup of blueberries, one smashed banana, a couple dashes of cinnamon and a quarter cup of chocolate chips. 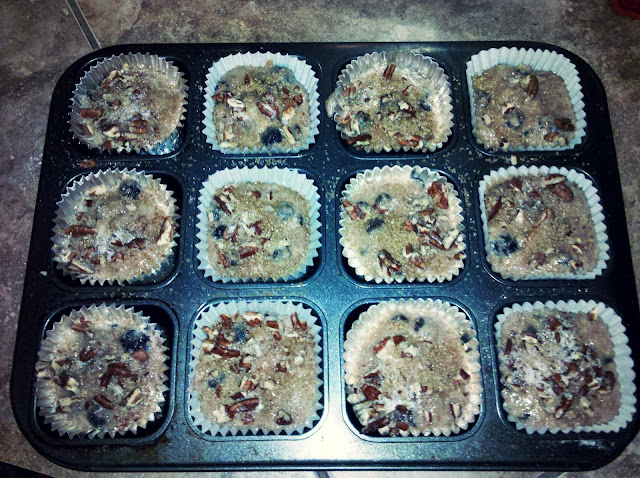 For the topping, I simply sprinkle some turbinado sugar, plus a finer grain raw sugar and some pecans on the top before baking.
You end up with these!﻿ 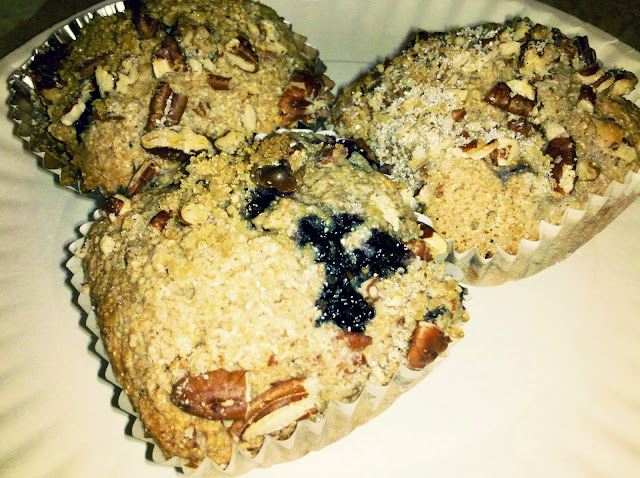 They don't last very long around here, which makes me happy because I know both The Husband and Kid are getting fiber, antioxidants, vitamins and minerals that they wouldn't get if I weren't here to make this kind of stuff for them.

I swear, I think they'd exist on frozen pizza and gas station doughnuts if I let them.

Ok, not gonna lie, somedays I do let them.

BUT, not nearly so often as they would like. I mean, I am the mom after all. Somebody has got to lay down some rules around here...

Posted by Brandy Cupcakes at 10:00 AM