In my defence, food really does comprise the majority of my creative body of work since the baby was born. I do have a couple of new illustrations to show you, and a few newer Etsy purchases too, but I need a few sunny and not crazy busy days to get some photographing done.

The Kid announced that she wanted wanted pancake sandwiches for lunch, a few days ago, and though my first reaction was, "Yo. Kid. YOU DO NOT BOSS ME AROUND!", it was quite speedily followed up with, "Darn it, that actually sounds really good..." So I agreed to make them and decided to one-up her with pumpkin pancakes. Pumpkin CHOCOLATE CHIP pancakes. 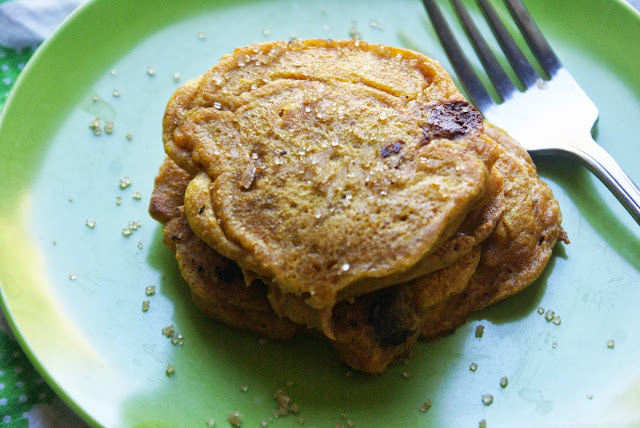 I used this recipe, and modified it just a little bit. I omitted most of the spices and used cinnamon since I did not have pumpkin pie spice at the time(I have since rectified THAT situation!), used a little more pumpkin, and swapped out dairy ingredients for non dairy. I also had to add in a little more flour to get a little thicker batter so I could have small, thick pancakes as opposed to thin and fluffy. You just add a few tablespoons at a time until you get a nice thick batter.

So I ended up with the following-

2 teaspoons baking powder
1/2 teaspoon cinnamon
1/2 teaspoon salt
1 cup almond milk
1/2 can pumpkin puree
2 tablespoons melted soy free Earth Balance spread
1  egg
handful(or two) of chocolate chips. Use Enjoy Life brand if you are avoiding dairy/soy
Peanut butter
Mix and cook in medium heat skillet that's been greased. You can use cooking spray. I used coconut oil. Spread peanut butter on a pancake and top with another, then sprinkle with demerara sugar. I made our pancakes about three or four inches in diameter, so The Kid could hold the sandwiches in her little hands. 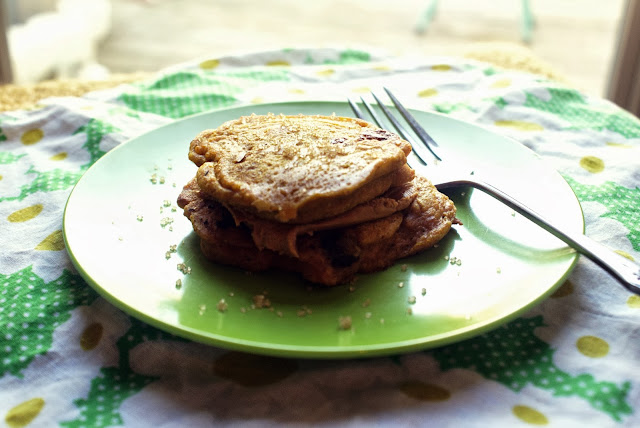 They were a hit! And we'll probably make these again.  They are super easy to customize. I'm thinking blueberry pancakes with sliced bananas and pumpkin butter next time. And I can see her father cooking up an egg to stick in the middle of one of these. *Shudder*
Pancakes are such a fun alternative to regular bread every once in a while, and they are a lot faster and easier to make! 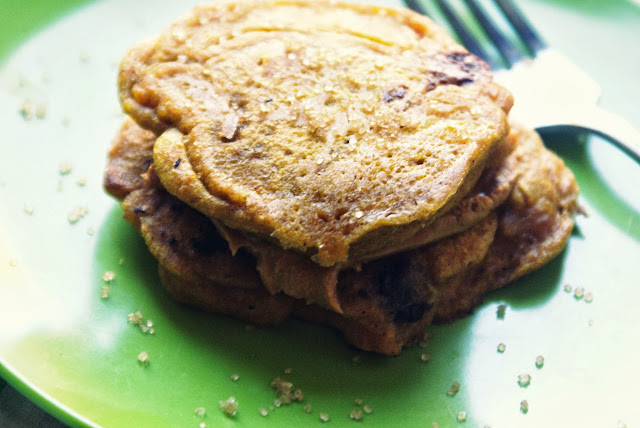 Obviously you wouldn't want to serve these to your kids everyday, but I am of the opinion that life is too short to spend it avoiding pancakes like they're the plague.
But that's just me.
Posted by Brandy Cupcakes at 8:04 AM