The Husband and I went on a little trek, last week. We were at his parents' house when he started telling me about a little place in the woods that he used to wander to as a kid. I asked if he would take me, but he did not really want to. He warned that it was a good distance away, and it was sort of cold. And really muddy. I was intrigued, so I  pleaded, just a bit, and gave him the kitten eyes until he agreed to take me.

We left the kids with his parents, then I hiked up my maxi skirt and we set out across a corn field, full of brittle chaff and stiff root bundles and mud that seemed to be full of suction cups. We crossed a small patch of dried grasses, which pulled the caked mud from our shoes, and a ditch full of frozen snow. Another muddy field, marked by the sharp, woody remains of bean plants was next to be crossed. Eventually, we reached the woods. He took me to a little hill which overlooked a little valley and frozen stream. It was a beautiful scene. The trees, so naked, made for a wonderfully clear view. The white of the snow and the blackness of the dirt were punctuated here and there by brilliant green moss that was thriving on dead and decaying bits of tree bark. Rusty colored oak leaves littered the ground like the confetti aftermath of a big parade.

We stood awhile, listening to the quiet sounds of the wind through the trees and cheery birds. We pondered what it must have been like to be pioneers, seeing these sights for the very first time, and romanticized about being farmers. It is not the first time we've dreamed about the farm life, but we both know it is much harder than romanticizing leads you to believe, and we just are not sure that we have the fortitude or endurance and discipline required to make a go of farming.

He mused that being a young boy and having free reign over some rarely traversed woods was a fabulous way to grow up. I conceded that it probably was, but that there was no way I could ever let our kids out to wander without adult supervision. Too paranoid.

We were on our way back to the bean field when we noticed a gully full of junk, and my inner archaeologist(or treasure hunter, or picker, or pirate!) came out. I wanted to explore.

And so we did.

Unfortunately the ground was still fairly frozen, so it was difficult to pick up much of anything. The Husband found a few little bitty glass bottles that were half way exposed, and after much digging, scraping and picking, using bits of metal, sticks and some broken plastic combs we found, we were able to unearth our little treasures. 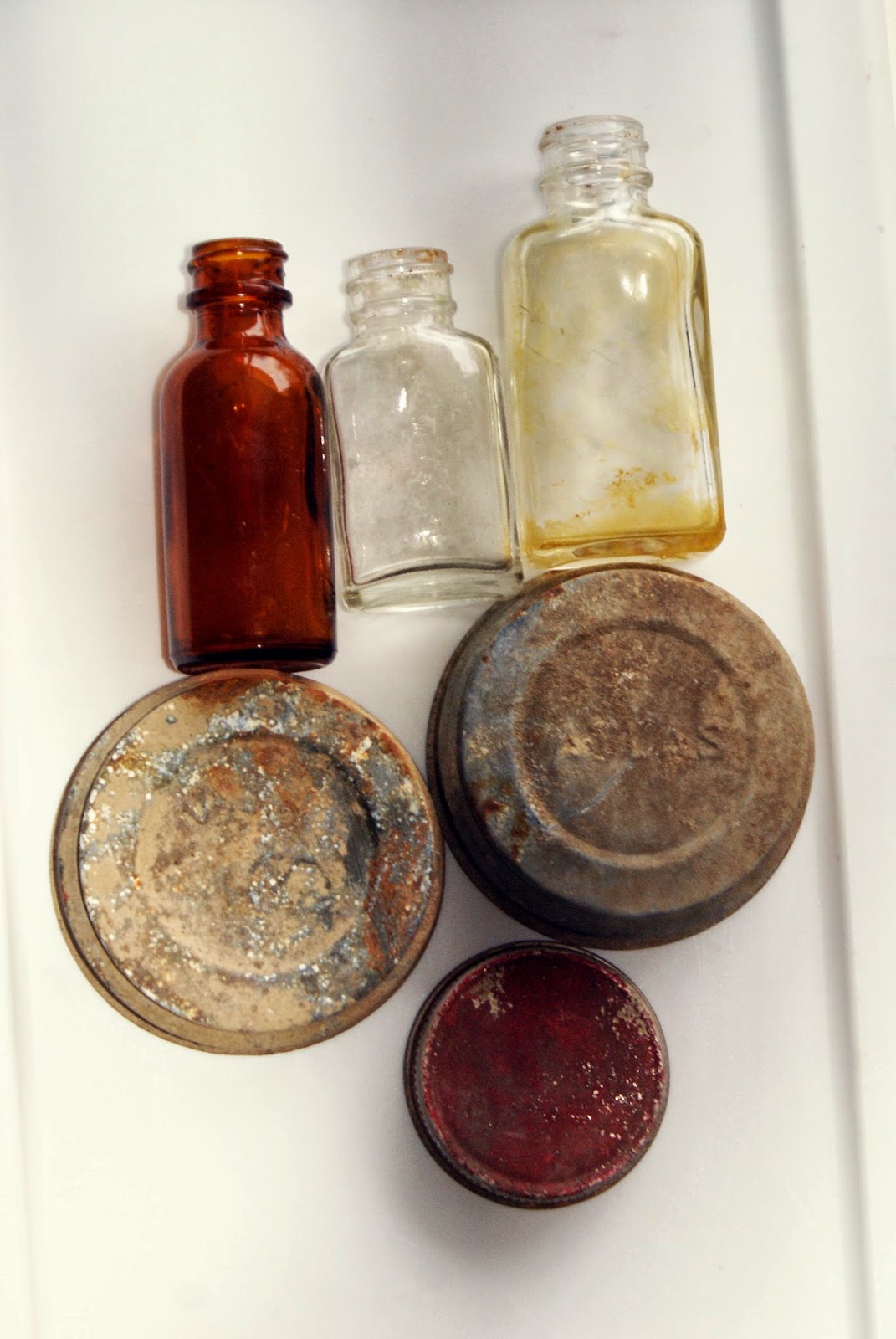 We also picked up a few rusty metal lids, and this big ole can. 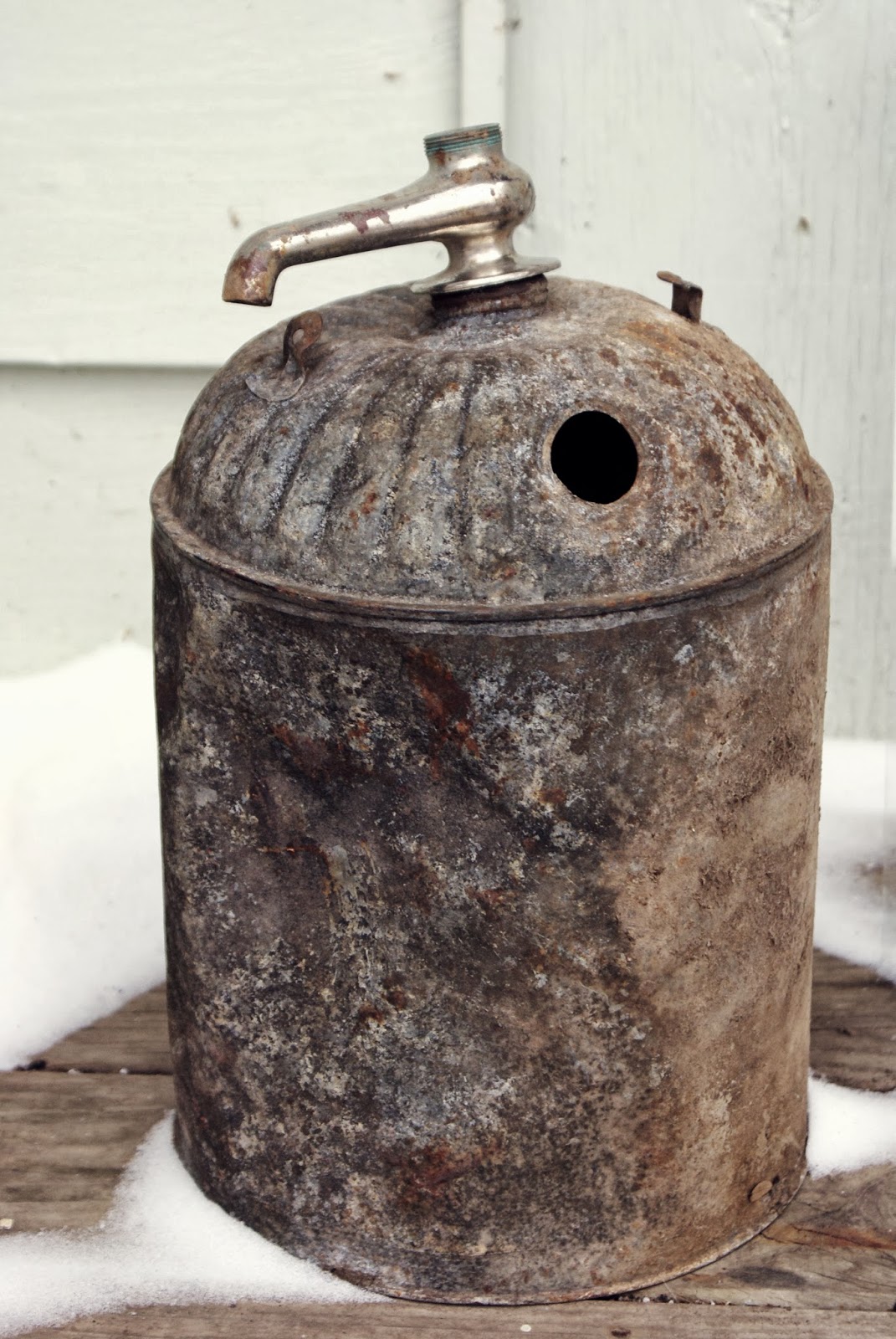 And part of a faucet.

I think we are going to turn the can into a lamp, and the faucet into a wall hook.

As we made our way back across the fields, our cheeks pink and our noses running, with mud squishing and plant remains crunching underfoot, I couldn't help but feel a little giggly and excited, like a kid who had just partially realized their dream of becoming a Boxcar Child.

The Husband and I do not get a lot of alone time together anymore, now that we've got a baby and a kid, so it probably seems like a silly way to spend what little time we did have, but I tell you, we had more fun that afternoon than we had in I don't even know how long. And, his willingness to keep working towards freeing those little bottles from the earth(even though I knew he was ready to quit) just to please his treasure eyed wife(I wasn't going home without treasure, darn it!), was just a testament to how much the man loves me. Even when I am absorbed by a sudden, crazy obsession. The man loves me.

We joke that the bottles are probably worth about ten cents, because they are not antiques or anything, but to me, they are priceless. They are a happy memory in the shape of a cheap glass bottle, and a reminder to not get so caught up in our grown up lives, that we let the magic of nature and discovery and adventure escape us.


Posted by Brandy Cupcakes at 5:30 AM