So, in actuality, this project took several days to complete the finished pieces I am going to show you today. And about half the total amount of clothes I dyed are still waiting on custom appliques that I am going to make(in order to cover up the ones they currently display). Thus, this is part 1. When I get the pieces waiting on appliques finished(hopefully before the child is actually born, ha!) I promise I shall post the part 2

Hand-me-downs are great things. Especially when kids are little and all they do is pee and poop and puke all over their clothes anyway. When The Cupcake Kid was born, I accepted all the hand-me-downs anybody would give me, in addition to buying new outfits because I figured you could never have too many baby outfits.

I was SO wrong. You can definitely have too many! In fact, she never wore most of the new clothes I had purchased for her, as I ended up saving those for days when we got out of the house(which were not really that many) and relying on the hand-me-downs for her everyday clothes. I guess I just didn't mind those getting dirtied up because many already had insignificant stains and they hadn't cost me anything money wise, so it wasn't a big deal if they were suddenly "ruined".

When you have children who are of the same sex, hand-me-downs can really save you a lot of money. And time. When you have children of opposite sexes, nottttttt so much. This is my dilemma. I have a lot of little girl clothes, but I am expecting a little boy. Though I don't have a problem with little boys wearing pink and purple and such, all the lacy, frilly stuff is just a bit too much for my taste.

Determined not to call T.C.K.'s wardrobe an entire loss, I picked out all the pieces which I thought could potentially and easily be upcycled with a little dye and some custom appliques(think hand embroidered/painted acorns, leaves, robots, deer and such) into pieces that were appropriate for her brother.

I'm not a big fan of the chemicals in commercial dyes, so I stuck with boiled teas and spices(with vinegar used as the mordant) to revive about a dozen or so faded and dingy onesies, shirts and pants in sizes ranging from newborn to 2T. The ones with the best dye jobs, and the ones that did not require appliques to cover up pre-existing girly graphics and appliques(things like the word "princess" and sparkly cupcakes and ruffle petaled flowers) are the ones I'm going to show you today. Because I'm too impatient to wait until they are all done to create one giant post.

Yeah. So here's a before photo of some of the clothes. 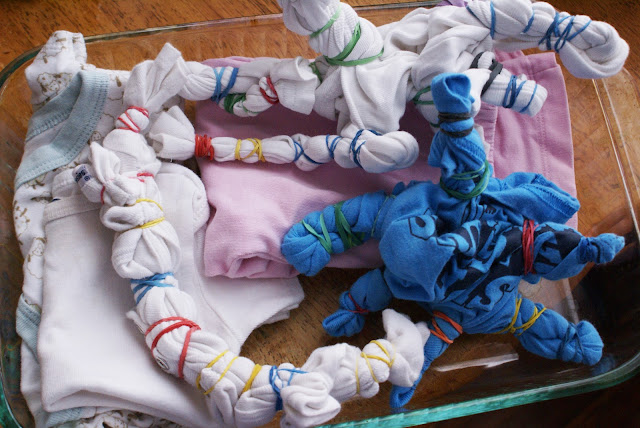 Here's a few photos of the dye baths in progress.

The first pot features a combo of coffee grounds and black tea. The second features coconut chai tea. I also used mustard seed, prepared mustard, raspberry and peach teas, and a few other spices that I can't even remember right now, in a few of the other batches. It was totally a no pressure experiment for me, and I sort of figured things out as I went. Several pieces even had to be dyed twice since I wound them up so tight in the rubber bands that there was hardly any dyed fabric at all after they were washed out. Hey, it had been a long time since I went through a tie-dye phase and pregnancy brain failed to remember exactly how to bind the fabric up.

It also failed to remind me that information is just a click away on the internets...*sigh* 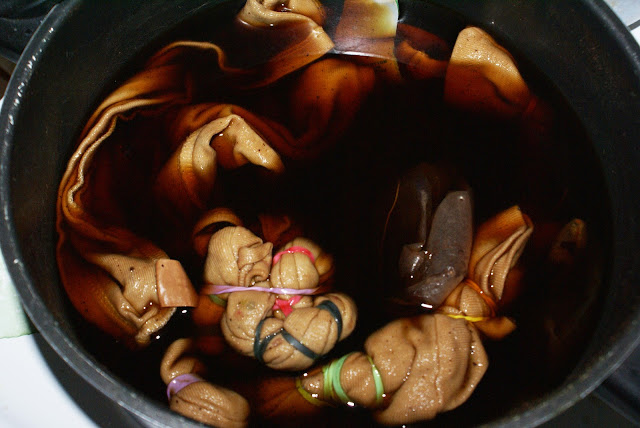 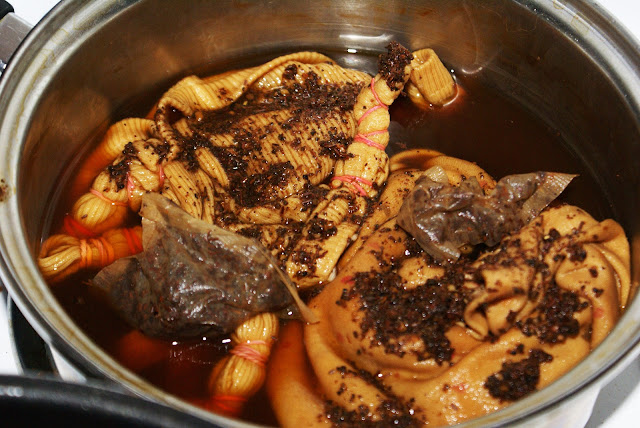 Anyway, when all was said and done, here were the pieces I ended up with that I really liked as is.

They are tie-dyed, but it's a very subtle tie-dye, and I really like that fact. 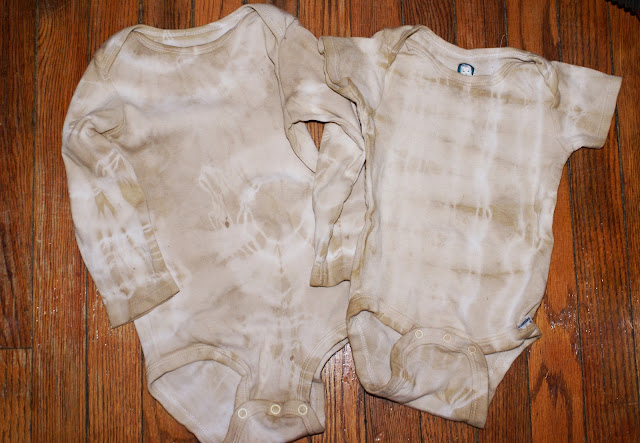 The Husband says our kid is gonna look like a hippie. I think that I'm about 25% hippie, so I'm ok with that. I have an auntie(one of my favorites) who really is an old(her words, NOT mine!) hippie, and I know she would love these. She's one of the coolest, most inventive and creative people I know. The woman can upcycle just about anything under the sun. I wouldn't mind being an old hippie like her someday! 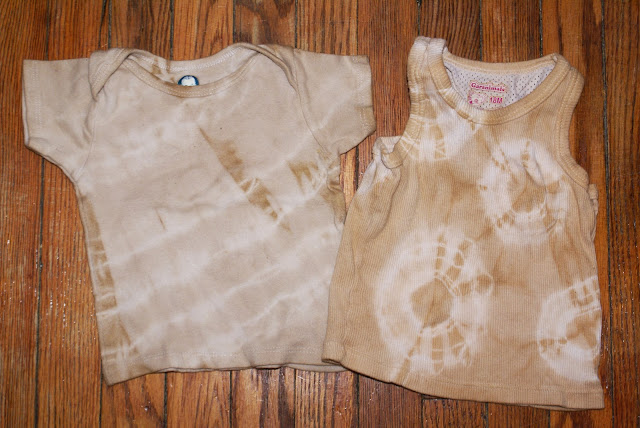 The shirt on the left(below) turned out a nice even shade of brown, which almost exactly matches The Husband's National Guard undershirts.  So I guess the kid will be a part time hippie and a part time soldier. Which, I guess makes sense, all things considered... 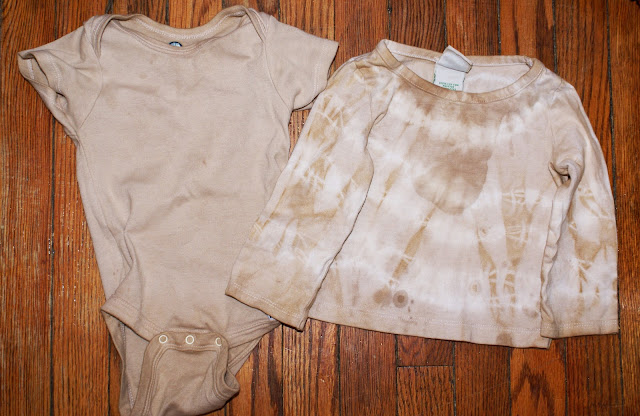 As previously stated in other posts, I am not a tutorial writer. And, I am by no means an expert on this craft medium, so I wouldn't want to try and tell others how to do it anyway. What I will do is briefly explain what I did, and suggest that you do a few google searches before attempting to dye with natural dyes, and pick the method which seems like it will work best for you since there is a lot of conflicting information out there.

Personally, I boiled each batch of clothes(all were cottons) in mixes of vinegar and water(about half and half) for about half an hour(some websites said ten minutes, one even said an hour, so I went with a half hour), then rinsed and rung the pieces out before immersing them in the pots of boiling dyes.

To make the dyes I simply dumped tea bags/coffee grounds/spices into pots ful of water and heated until boiling. Easy Peasy.

I actually boiled/simmered the clothes in the dye baths for about an hour before turning the heat off and letting the clothing soak overnight(Some websites said boil for ten minutes then turn the heat off, others said the hour that I did). Some pieces I soaked for about 24 hours.

When I was finished soaking, I rinsed the pieces out in cold water and rung the excess water out of them(making sure to leave the rubber bands in place), then hung them from my drying rack in front of a heating vent, until they were dry. When they were completely dry, I unwound the tie-dyed pieces and threw the whole kit and caboodle into the washing machine and then the dryer. Many websites will encourage you to handwash your tea dyed pieces in mild detergent, but I wasn't worried about fading so I just chunked them in. And surprisingly, they didn't fade.

And now I have a bunch(well, half a bunch anyway) of refreshed baby clothing that will be more than suitable for our new little guy and whatever messes he may throw(or pit or poop) at them. And I can feel really good about these pieces because they are upcycled, saved me money, involved no icky chemicals being released into the water supply during their creation, and are completely and totally one of a kind.

Pretty cool, huh? And no patchouli was involved!

Posted by Brandy Cupcakes at 12:01 PM

Email ThisBlogThis!Share to TwitterShare to FacebookShare to Pinterest
Labels: baby goods, Clothes, Clothing, dyes, Kids, upcycling, What We Made Today