I have always been creeped out by vintage dolls. Not Strawberry Shortcake or Rainbow Brite or Cabbage Patch(except those weird Koosas) vintage, but the ones that came before. You know, those glass eyed dolls from the 1950's and before. I don't know, there's just something...unnerving about their stares. Especially the ones with the moving eye parts. They don't resemble any child I've ever known, and they don't look particularly cuddly and cute either. I don't trust them, and I sure as heck cannot spend a night sleeping in a room with one. If you invite me to your house and your guest bedroom contains creepy old dolls, don't be surprised to find them stuffed into your hope chest or lined up outside of the guestroom door in the morning. Sorry, but I don't find your creepy dolls trustworthy when I'm at my most vulnerable, sleeping with my guard down.

Once, when I was young, my grandmother sent us a a very tall and awkwardly heavy and fleshy vintage doll, with extremely close cropped, slightly curly and very coarse(I think you could have washed your dishes with it) butterscotch colored hair, and those creepy openy closey eyes. It bothered me so badly that my mother and I wrapped her in a black plastic garbage bag and stuffed her under the stairs so nobody would have to see her again. It was like, "The Sopranos, Iowa".

Anyway, I tell you these things because as I was strolling through the local SalArmy the other day, I came across what I assume is a big ole doll head, probably from the 1950's or 60's, I think, and was oddly, indescribeably, drawn to it. 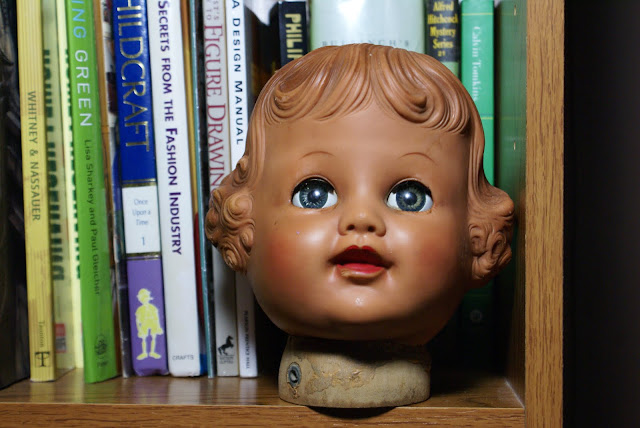 It was marked "$5", which seems a little expensive for a doll head with no body(at our SalArmy where I can buy a jelly glass jar full of buttons for the same price, heh heh), but I just had to have it. There was something about it that struck me as only slightly quirky creepy(in fact, almost hopefull/quirky/creepy), and not murderously creepy. Maybe the fact that it is only a head with no body accounts for that. I mean, what harm can a helpless head cause in the middle of the night while I am asleep? I suppose it could hop over and bit me, but I suspect that may be just out of it's realm of capabilities. Anyway, it is attatched to a wooden base(which makes me wonder if maybe it was actually part of a mannequin or something?) so it is just perfect for display on the book shelf in my living room, which is where it is now perched. So at least she can't attack my child in her bedroom, should the mood strike her. Because, she'd need, you know, hands, to open the bedroom door... 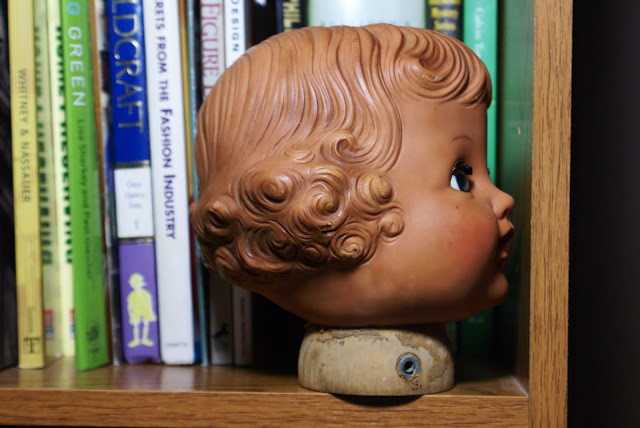 Annnnnywho...all thoughts of murder by doll in the middle of the night aside, this is my favorite find of the new year(so far). It is another one of those odd finds that makes my house feel just a little more comfortable and "homey" to me. I mean, some people find that designer pillows and pictures frames and furniture from certain stores, a fireplace, a big kitchen or a Jacuzzi tub, make them feel comortable. For me, it is weird little doll heads that I stumble upon at the Salvation Army.


And if I have even the slightest suspicion that the dang thing has moved, turned or blinked her eyes in the middle of the night, I will be promptly wrapping her up in my orange Anthropologie ruffles comforter then tying her up in a garbage bag and stuffing her under the stairs.

Or placing her in the window that faces my neighbors' patio, so she can cast her glassy stares at them. Maybe then they'll quit feeding the birds that crap all over my car...
Posted by Brandy Cupcakes at 5:34 PM

Email ThisBlogThis!Share to TwitterShare to FacebookShare to Pinterest
Labels: dolls, Thrifting, What I Found At SalArmy