The Week In Pictures

This month marks 15 years since I graduated high school. FIFTEEN YEARS. I think this means that I am officially an old and out of touch geezer?!

Maybe not quite yet. It does feel like some of my generation are starting to get there, though. Their eyes seem to become more and more critical of the younger generations with each year that passes. I see them complaining about "kids these days..." on Facebook and I'm just over here like, "Were you the least bit present during your own teenage/early adult years? Because you don't seem to remember them as well as I do, and I was only a bystander/onlooker..."

Any who, I graduated a semester early.

And I did not attend the graduation ceremony the following May.

I don’t know where I thought I would be in fifteen years, but I do know it wasn’t here. I was always an artist, and California or New York seemed like the places to be to pursue that career path. Definitely NOT here.

Here is probably a better place than I thought I would be, though. I’m sitting on the couch under a cotton quilt with a cup of hot chocolate tea(topped with marshmallows AND whipped cream!) listening to my oldest kid read the first Harry Potter book to the youngest as I sketch booth designs(for markets/shows) and we wait for their Dad to get home. I am warm, safe, comfortable, content and mentally healthy. I am pursuing my art at my own pace, on my own terms. I don't think I would have been strong enough to survive art school/the big city/new relationships had I made such a big leap straight out of high school. I was too mentally and emotionally frail, what with all my undiagnosed acronyms, emotional baggage and all.

Ultimately, it isn't really worth spending too much time thinking about. A hundred million different things could have happened. There's no way for me to know, 100%, what the "best" decisions at any given time were. Or are, for that matter. It was what it was and it is what it is.

I'm still hoping to make it to California and New York for art purposes though. I don't feel like I am "there" yet. But someday.

When I wasn't ruminating on the trajectory of the last fifteen years this past week, I was reading, stitching, planning out my booth for show season, receiving sweet art from sweet kids and watching over Hydrox Heartnose, our new kitty. He had been popping up in the yard for a month or so, and we initially thought he might belong to somebody in the neighborhood, but as the snow and cold crept in, it became obvious that nobody was caring for him. So we took him in a week and three days ago. It has been a bit of a transition period for him. He feels safe in the wood shop(an enclosed back porch attached to the house), so he's mostly been out there, but each day he stays in the house a little bit longer. Today is the first day he's been comfortable enough to actually snuggle up on the couch and sit awhile. He's usually always on the prowl. Progress!

He's gassy, he drools, His ears and tail are just a tad too long for his body, he climbs the trim on the walls/around the doors, he seems to know what "no" means but he just doesn't care. I think he's going to fit in just fine here.

And we're pretty excited to have his stank butt hanging around, since our beloved fluff puff Jigglypuff passed away last summer.

All in all, it has been a pretty lovely week. 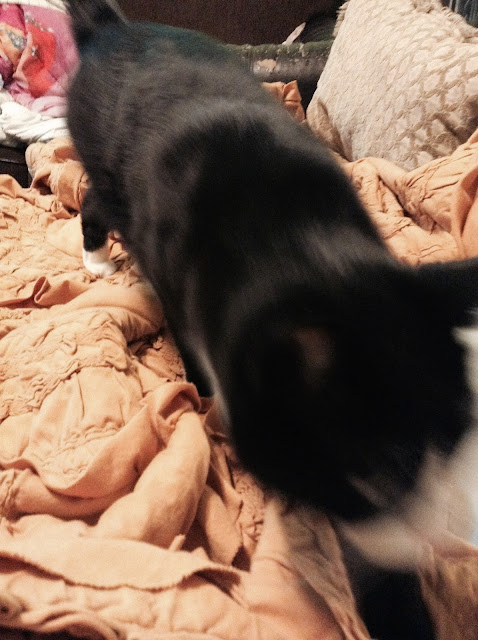 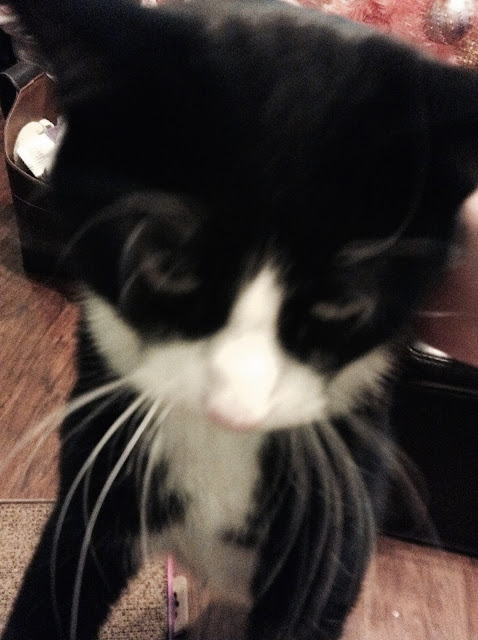 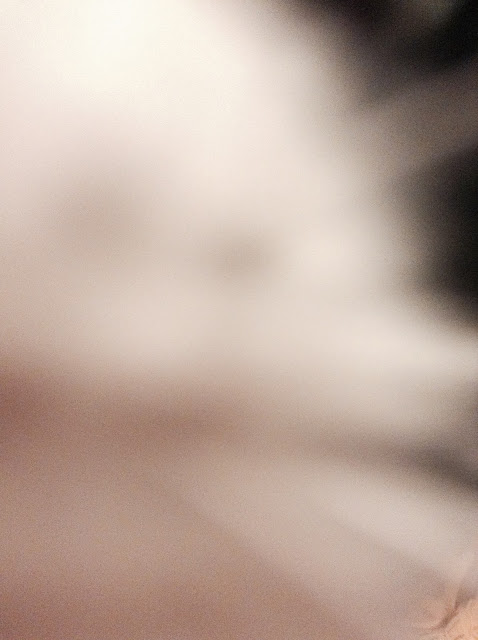 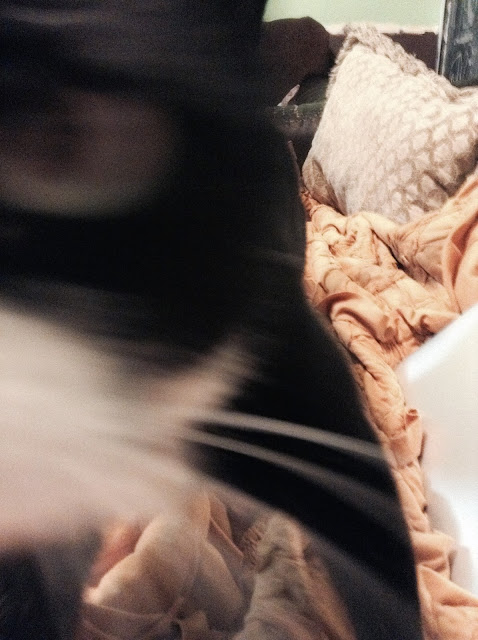 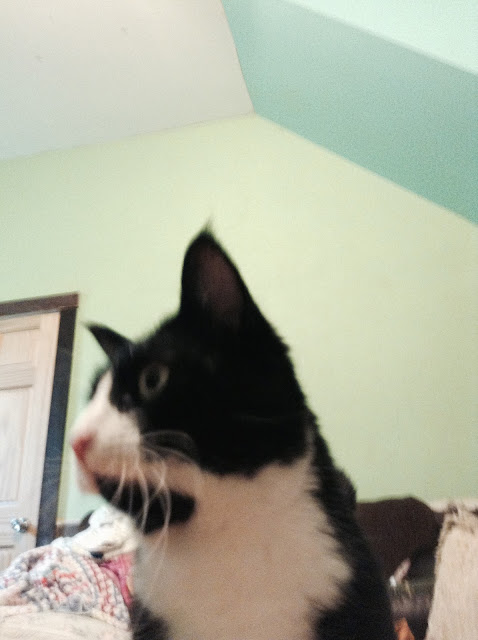 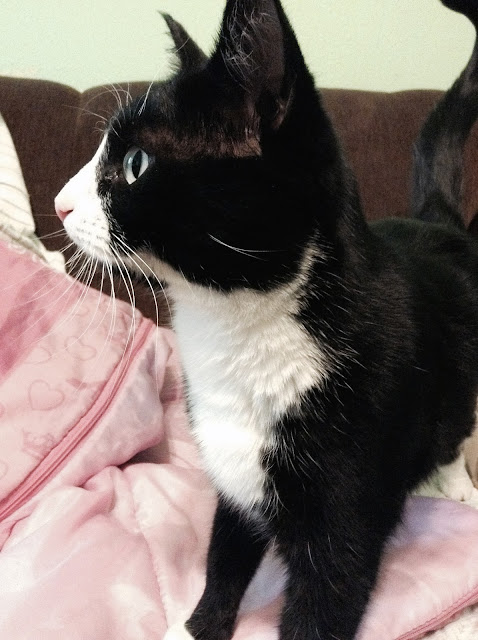 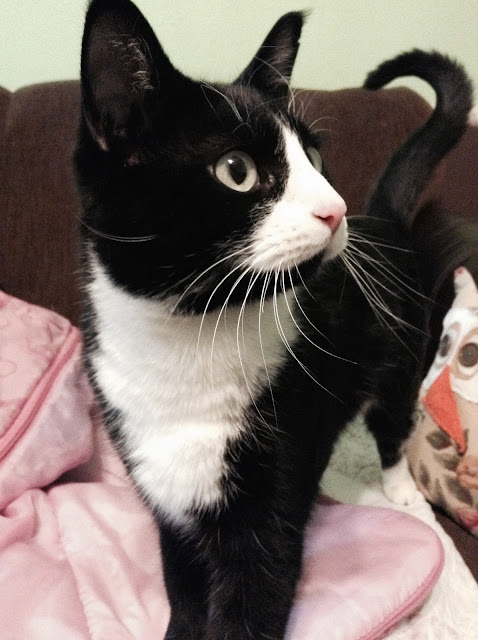 And then, for just the briefest minute, he finally curled up right beside me. My heart melted like hot wax, I tell you. He was comfortable enough to fall asleep. 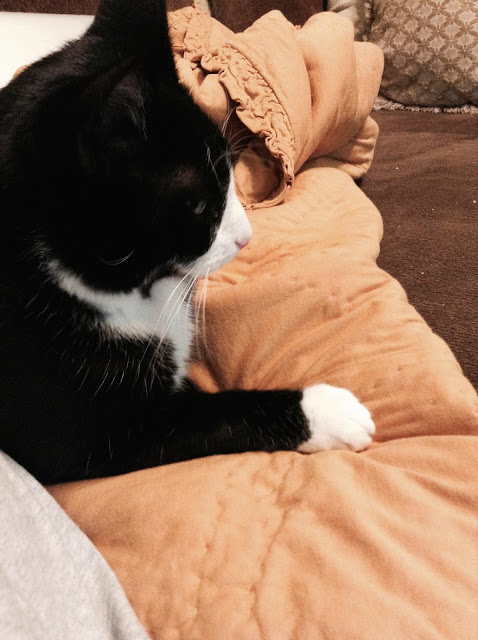 But only for a minute. Then he remembered to wake up and be on alert. 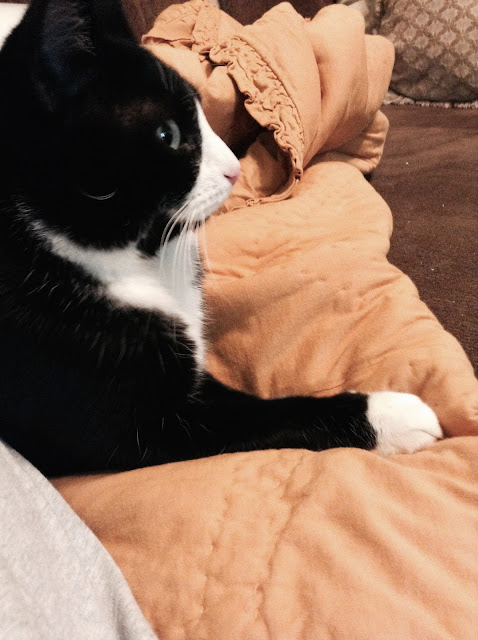 I look forward to the day when he feels comfortable enough to nap in the same room as us. The vet told us he's about a year old, and already neutered. So who knows how long he had been on the street, or what disappointment and distrust humans have previously sowed in him. It will take some time for him to realize that we love him.

And we do love him already. I mean, just look at the mug on that goofy little cookie. And those sweet little socks. How could we not love him?!

I apologize in advance for the copious amount of cat photos that are about to hit this blog...

Posted by Brandy Cupcakes at 12:48 PM